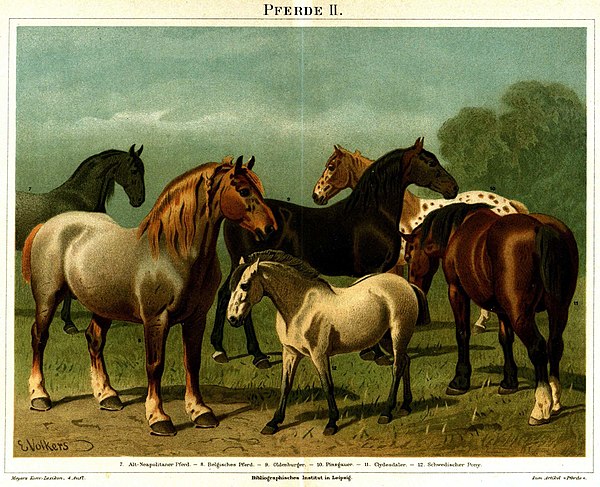 The horse is a domesticated one-toed hoofed mammal, part of the family Equidae. It is one of two extant subspecies of Equus ferus. It evolved from a small, multiple-toed creature called Eohippus to the large, single-toed animal it is today.

Horse breeds come in many varieties and are widely different from each other. Over 350 different types have been identified around the world. Some of these breeds are used in harness and drayage, while others are used for racing and ranch work. The number of horse breeds varies depending on what the breed is used for.

Horse breeds come in several different sizes and shapes. Some are light, while others are heavy. Light horses are smaller than heavy horses and have thin legs. Many light horses weigh less than 1,300 pounds. Small horses, such as ponies, are small, lightweight horses. They range in size from around eight hands to fourteen hands tall and are generally lighter than a full-grown horse.

According to The Breeds of Livestock Project at Oklahoma State University, there are over 217 horse breeds around the world. Most of these types have been blended or developed from other species. Some breeds are extinct, while others are still being used as animals. Most of these breeds have registries. Some of these registries are growing in number due to the need to collect data about endangered types.

There are hundreds of different horse breeds. Some are rare and only found in certain parts of the world. Others are endangered. Many British horse breeds are in serious danger of extinction. One of the most endangered is the Konik. This breed has close ties to the Tarpan, an ancient and primitive forest dwelling animal. The Tarpan died out in the late 19th century and was officially extinct in 1910. Since their introduction to the UK in 2002, Koniks have been helping to restore national nature reserves and ecosystems.

There are a few breeds that have been bred for centuries. In southern California, the Camarillo White Horse has been part of a century-old family tradition. They’ve been used in flashy parades and have beautiful, white coats. The white color of these horses is due to a gene mutation that prevents the coat from expressing color. This gives them a dazzling white appearance that makes them look like unicorns. Rare horse breeds like the Camarillo White Horse have very limited numbers.

The colors of horse breeds play a vital role in identifying them, and there are many color patterns and combinations to choose from. In addition to temperament and conformation, coat colors are another important consideration when selecting a horse. In order to ensure that your horse has the correct coat color, it’s important to follow the conventions.

The most common horse colors are black, white, and gray. Different breeds have different degrees of these colors. Some horses have a reddish undertone to their coat, and some have pink or white spots on their bodies.

Horses vary greatly in size. Their chromosome 3 has a region called the LCORL locus that is associated with size. The results are similar to those for other mammals such as domestic dogs. The size of individual breeds can be compared to each other by plotting their sizes on a graph.

The size of horse breeds varies, but the average horse stands around five feet. However, some breeds can grow up to seven feet tall. Other breeds of horses are smaller, and they can be as small as 25 inches tall. There is no standard size for a horse, so each breed has its own size and shape.

The origins of horse breeds are complex, but they can be traced back to a common ancestor. Around 2200 bc, a new ancestry profile began to emerge outside of the steppes of Western Eurasia. After spreading to the lower Danube and central Anatolia, it replaced pre-existing lineages and helped create a highly connected population. The horse’s dispersal was massive, and involved mares and stallions. It also resulted in an increased genetic connectivity across Eurasia.

Recent studies have been conducted on the origins of various horse breeds. One such study involved studying the mitochondrial DNA of horses, which is passed down only from the mother. It revealed the great diversity of haplotypes among the ancestors of many modern horse breeds. This result supported the hypothesis that the domestication process occurred at multiple sites, and that some ancient breeds inherited genetic input from local wild horses.